It's been three years since I updated this section of my blog, but I've got another update to publish. I have a folding bluetooth version of my Chordite now. The pictures of my MarkXVII are over on Flickr. This is 3D printed on my printer. The idea is to be able to print multiple sizes for people with different hand sizes. 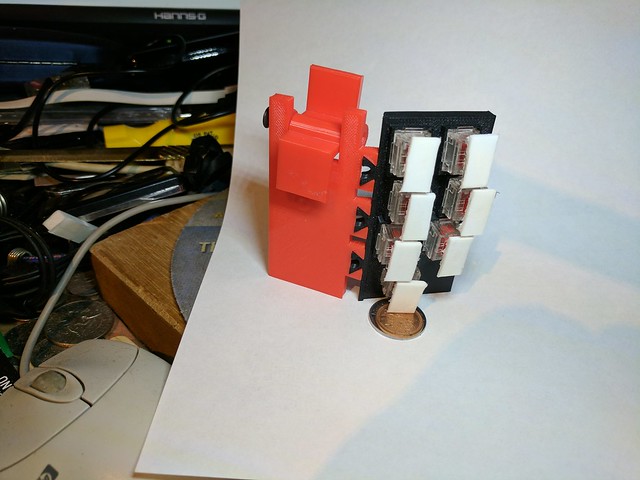 It's been a couple of years since I updated this section of my blog, but I've finally got an update to publish. I have a folding bluetooth version of my Chordite now. The pictures of my MarkXVI are over on Flickr. This one is still made out of shapelock. I tried, without much success to have the ground wires be the frame of the keyboard, so you could bend them into the shape you want before setting it into stone with the Shapelock. This version also has, in addition to a USB interface, a bluetoooth interface. Finally found a module that would work reasonably well with a Teensy. I've recently found one which might not even need a Teensy, but it needs more development than I want to put into it right now.

The XVII will have a 3D printed key holder, with the idea that I can measure people's hands and make them a bespoke keyboard that fits their hand well enough.

I've given up on the Mark XIII keyboard. The problem is that the small PC board plus the brass barrier was too big to position close enough even for MY hands. I've got a Mark XIV keyboard which uses different switches (surface mount SPST very short displacement). Soldered the switches directly to the copper wires I suggested earlier, and ran wires to the bottom, weaving them into a grid holding the keyboard firmly. Got them as I wanted them and put polycapralone on both sides as reinforcement. Have a folding knuckle rest, thumb rest, and palm heel rest. It's by far the smalltest keyboard I've made so far.

I'm using a wired keyboard this time, to see how compatible I can make it. It's based on the Teensy. It's very similar to an Arduino, but it can take on a USB Keyboard flavor.

Sigh. So little time, so many keyboards. The Mark XIV keyboard, using surface-mount pushbuttons was utter fail. Had I actually looked at them, I would have seen that they can't withstand any sideways force at all. Consequently, they break when you look at them sideways. I only discovered this after arriving in India and finding three switches completely useless. Oh well, back to the reliable Marquardt switches. Will remove the surface mount switches and replace them with the Marquardt switches.

Working on the Mark XIII keyboard. This one will have the keymodules connected together with a matrix of stiff-ish copper wires, covered over in polycapralone. The theory is that people will be able to change the shape of their keyboard by heating it up using a hot air blow dryer. That will soften the polycapralone, which gets quite soft, and won't hold up its own weight, hence the copper wires. The keyboard owner can push the keymodules around until they're in the perfect position for them. The copper wires will hold the shape until the polycapralone hardens, making the keyboard both flexible and stiff, soft and hard, as needed.

Here are a set of keymodules, soldered to a small PC board, with a brass strip used as a barrier against the polycapralone. Without the barrier, the polycapralone would stick to the keys and/or jam up the key movement.